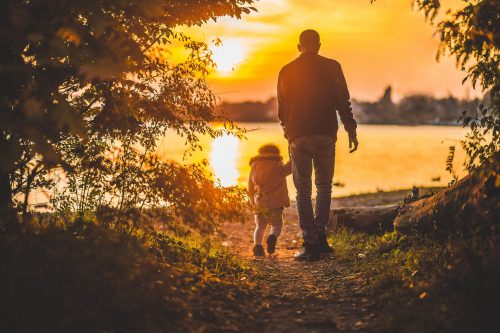 For some years in Sweden we have had a Christian network called *Eunike to bring out the great importance of parents, and give them the support they need to be able to give their children a good foundation for the whole Life. The background to this network came to me already when I was a student. When I studied the science of religion, I was offered the possibility of having talks with a therapist, to get to know myself better. I realized how much my parents have meant to me concerning what kind of person I am today. This heritage has had an impact on my way of thinking, my sense of humour, my sensitiveness and my care and attention. It has also had a great importance for my view of the whole Bible as Gods Word for all mankind, and my trust and confidence in Jesus Christ as the sole Saviour for me and the whole world.

All this has gone deep down into my soul. It is so rich a heritage that I think I will never realize the whole extent of it. I didn´t get all this as a package, a cloning of my father´s and mother´s physic, emotional and spiritual genes. But it is a heritage I have got to manage. It does not automatically spread in me, bearing fruit, but it is something I carry with me, and I somehow have to choose myself how much I will let it blossom out or fade away. It is like a flower-bulb which lies in the ground year after year.

My parents were not perfect and they were not always conscious of what their influence implied. However, their upbringing made a deep mark in me and in my soul. It was not mainly their Words that made a lasting impression, but their life. Now I have the opportunity to pass on this good heritage to my children. A heritage is easy to receive, but it can easily and fast be wasted. If we take in the good heritage, carry it within us and pass it on, it becomes a valuable gift and a blessing from one generation to the other. This is crucial for individuals, families and for nations too.

Having realized this I wrote a book about my experiences of being a parent, and of my vocation for preaching. The book got the title “At the Request of God”, for as a parent you have a twofold vocation. One is to care for your child and give it all it needs to lead a good life. The other part for Christian parents is to pass on our Christian faith, its values and life. These two parts we deal with on God´s commission, and parts of the vocation concern all mankind at all times. The book was published in 2007 by ** “Riksförbundet Kristen Fostran”, that is “Christian upbringing in Sweden”, which is, as we have told you before (translator´s observation) an old Swedish association for teachers. In 2009 I presented a proposal to the association to organize a network to be able to support parents in their Christian vocation.

Today above all our network *Eunike gets in touch with people by internet, e-mail and facebook. We have written a lot of articles about parentage and we have produced a number of videos with the book as a basis. We offer prayers for persons in need, and also talks with a psychologist or a lay welfare worker. In 2014 we founded “The Parents´ Day”. On 19 March we celebrate the holy man Joseph, who was the foster-father of Jesus. The reason for this foundation was to pay attention to the great importance of parents when it comes to establishing a solid basis for children´s lives.

On “The Parents´ Day” we announce who has been awarded “The Parents` Prize” of the year. This prize is given to a person, a congregation or an organisation which has given an important contribution to make parents able to give their children a good Christian basis. If we don´t bring up our children, they will be brought up by other persons or the currents of the season. That doesn´t give independence but dependence of what is casual or transitory. Therefore, if we want to have a democracy in function with independent citizens, we need to bring up our children and give them a solid ground to stand on and something to hold on to. It is their human right to have this as young children. It is of course also their right to renounce the belief when they get older. However The Children´s Convention, which gives the child the right to a religious belief, is a good foundation to stand upon.

There are among those who are the leaders of *Eunike persons with different backgrounds. Some of them have got the good heritage when they were children, some have not. What unites the people who work for *Eunike is that we as imperfect parents have a wish to pass on the best impressions that we have got like a relay race baton we have got, and now pass on. However, the religious situation in Sweden is barren. We are in the top layer of the most secularized countries in the world. We are working against the wind and battling against odds, but therefore it is of great importance that we go on working.

The most important thing is that we guard our vision: That all children – through their parents- will have a share in the ground of the Christian belief, its values and life. Whatever happens, our vision must be passed on. Our activities may change their form, our financial position may be bad, but if we lose our vision, we have lost everything. If this vision is not carried into the future, Christianity has no future either. To revaluate the vocation, responsibility and possibility of Christian parents ought to be on the programme of every Christian congregation or association as priority number one. To meet the secularization of our society we must start in our homes, in our families. Our Savior didn´t come on the skies, he was born into a family, His dear mother Mary and his beloved foster-father Joseph did everything that was within their parental responsibility.

If God , our Father, in his wisdom, care and attention let his Son, our Savior, be born into a family, and let earthly parents bring him up for his mission, who are we to think that the same model is not suitable for us in our time? This model or pattern is God´s gift. It is the way of our heavenly Father to take care of his and our beloved children and give them the best of everything. Let this be on the heart of every Christian, and let every clergyman or bishop realize the importance of this before the
secularization has struck its claws into our families and our children. Parents and grandparents and their care is the key which can reverse the development. But don´t let us do it for our own sake but for our children and our grandchildren. They are the future, and with their help we are now building the future.

The work of *Eunike is now built up in Sweden. Is this moment the right one to plant our vision in other countries? Has the time come to start similar networks in other European countries? Not by copying but by taking care of what is written, translate parts of it and be inspired by what has been built up. It isn´t above all about a new activity. It is all about the future for the Christian faith in Europe.

*The name Eunike.
Eunike serves as a model for us in the Bible. She received the faith from her mother Lois and passed it on to her son Timoteus.(2Tim 1:5) In that way faith was conveyed from one generation to the other. Eunice is Greek and means good victory.